In a recent incident in the United States, yet another unarmed man was shot dead by police after opening his front door in response to their knock. The police were going to serve an arrest warrant on a domestic violence suspect – the man’s neighbour – but went to the wrong address. See ‘Police kill innocent man while serving warrant at wrong address’.

US police wearing riot gear walk toward a man with his hands raised in Ferguson, 11 August 2014. Photo: AP – Jeff Roberson

For those who follow news in the United States, the routine killing of innocent civilians by the police has become a national crisis despite concerted attempts by political and legal authorities and the corporate media to obscure what is happening. See ‘Killed by Police’ and ‘The Counted: People killed by police in the US’.

Of course, these murders by the police are just the tip of the iceberg of police violence as police continue to demonstrate that the freedoms ‘guaranteed’ by the Fourth Amendment have been eviscerated. See ‘What Country Is This? Forced Blood Draws, Cavity Searches and Colonoscopies’.

So why are the police so violent? you might ask. Well, several scholars have offered answers to this question and you can read a little about what they say in these articles reviewing recent books on the subject. See ‘The Fraternal Order of Police Must Go’ and ‘Our Ever-Deadlier Police State’.

While there is much in these works with which I agree – such as the racism in US policing and the corruption of the legal system which is used to violently manage oppressed peoples in the name of ‘justice’ while leaving the individuals, banks and corporations on Wall Street unaccountable for their endless, ongoing and grotesque crimes against society, the economy and the environment – I would like to pose a deeper question: Why are police in the USA so terrified? This is the important question because only people who are terrified resort to violence, even in the context of policing. Let me explain why this is the case and how it has occurred in the police context in the USA.

Violence does not arise ‘out of nowhere’. And, sadly, its origin can be traced to what is euphemistically called the ‘socialization’ of children but which is more accurately labeled ‘terrorization’. You might think that this sounds extreme but if you spend some time considering the phenomenal violence – ‘visible’, ‘invisible’ and ‘utterly invisible’ – that we adults inflict on children during the ordinary course of the day – see ‘Why Violence?’ and ‘Fearless Psychology and Fearful Psychology: Principles and Practice’ – while deluding ourselves that we are preparing them to become just, decent and powerful citizens, then you might be willing to reconsider your concept of what it means to nurture children. Tragically, we are so far from any meaningful understanding of this notion, that it is not even possible to generate a widespread social discussion about how we might go about it.

So, having terrorized children into submission so that they unthinkingly and passively accept their preordained role in life – to act as a cog in a giant and destructive enterprise which they are terrorized into not questioning and over which they have no control – each of them takes their place in the global ‘economy’ wherever they can find a set of tasks that feels least painful. The idea of seeking their true path in order to search out their own unique destiny never even occurs to most of them and so they lead ‘shadow lives’ endlessly suppressing their awareness of the life that might have been.

Some of these individuals end up as recruits at a police training facility, where they are further terrorized into believing an elite-sponsored ideology that precludes genuine appreciation of the diversity of people in the community they will later police (that is, terrorize) in the name of ‘law and order’. After all, elite social control is more readily maintained when people, including the police, live in fear.

Police training further terrorizes the individuals involved and militarizes policing by encouraging recruits ‘to adopt a “warrior” mentality and think of the people they are supposed to serve as enemies’; the equipment they use, such as battering rams, flashbang grenades and Armoured Personnel Carriers, evoke a sense of war. See ‘War Comes Home: The Excessive Militarization of American Policing’.

But it doesn’t end with terrorization during childhood and then police training. Police practice functions within a long-standing cultural framework which has both wider social dimensions and narrower, localized ones. And this cultural framework has been changing, more quickly in recent years too. Unfortunately, more than ever before, this framework is increasingly driven by fear and older, delusional social expectations that police are there to maintain public safety or defend the community from criminal violence have given way to militarized assumptions, language and procedures that regard virtually everyone (and certainly indigenous people and people of color) as both dangerous and guilty until proven otherwise and treat the family home and car as targets to be ‘neutralized’ with military-style tactics and weapons. And this trend has been accelerated under Donald Trump. See ‘Trump to lift military gear ban for local police’.

By triggering fear and using military-style tactics and weapons, however, the very essence of the relationship between police and civilians is more rapidly, completely and detrimentally transformed in accord with elite interests. It equates law-enforcement with counter-terrorism and community safety with social control. 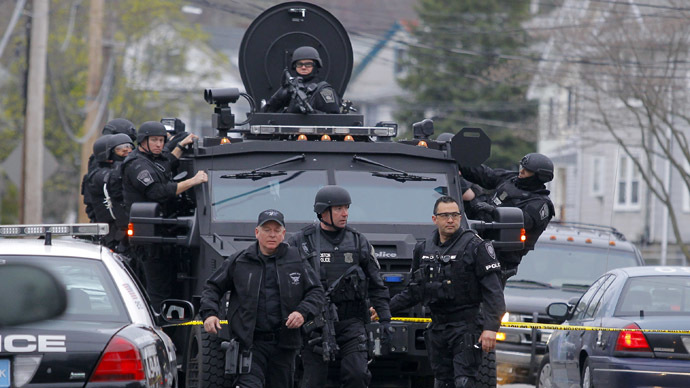 Militarization of the police in the USA

Fundamentally, of course, this plays its part in ensuring minimal effective resistance to the broader elite agenda to secure militarized control of the world’s populations and resources for elite benefit.

This transformation in the relationship between police and civilians has been accelerated by training US police in the use of military tactics that the Israeli military employs against the occupied Palestinians. See ‘Israel trains US law-enforcement in counter-terrorism’.

But consider the implications of this.

As Rashid Khalidi, the Edward Said professor of modern Arab studies at Columbia University, has noted in discussing this phenomenon: US police are learning paramilitary and counterinsurgency tactics from the Israeli military, border patrol and intelligence services, which enforce military law.

Israeli activist stands in front of a police water canon during a protest against Israeli police brutality and racism. Rabin Square, Tel Aviv, 3 May 2015. Photo: Activestills.org

‘If American police and sheriffs consider they’re in occupation of neighborhoods like Ferguson and East Harlem, this training is extremely appropriate – they’re learning how to suppress a people, deny their rights and use force to hold down a subject population’. See ‘US Police Get Antiterror Training In Israel’.

Moreover, the most tangible evidence that the militarized training is having an impact on US policing is that both Israel and the US are using identical equipment against demonstrators, according to a 2013 report by the Israeli human rights organization B’Tselem and photographs of such equipment taken at three demonstrations in the USA. ‘Tear gas grenades, “triple chaser” gas canisters and stun grenades made by the American companies Combined Systems Inc. and Defense Technology Corp. were used in all three U.S. incidents, as well as by Israeli security forces and military units.’ See ‘US Police Get Antiterror Training In Israel’.

Given the sheer terror that drives Israeli military policy towards occupied and militarily undefended Palestine, it is little wonder that this fear is transmitted as part of any training of US police. All knowledge and technology is embedded with emotion, and fear is utterly pervasive in any military activity. Especially when it is directed in pursuit of unjust ends.

So what can we do?

If you are interested in working to reduce police fear and violence, you will get plenty of ideas in the document ‘A Toolkit for Promoting Justice In Policing’ which is summarized here: ’15 Things Your City Can Do Right Now to End Police Brutality’.

If you want to organize a nonviolent action while reducing police fear to minimize the risk of police violence, there is a comprehensive list of guidelines here: ‘Nonviolent Action: Minimizing the Risk of Violent Repression’.

If you want to work towards ending the underlying fear that drives police (and other) violence, consider making ‘My Promise to Children’. In essence, if you want powerful individuals who are capable of resisting elite social control, including that implemented through police violence, then don’t expect children terrorized into obedience by parents, teachers and religious figures to later magically have this power.

And if you are inclined to resist violence in other contexts, consider participating in ‘The Flame Tree Project to Save Life on Earth’, signing the online pledge of ‘The People’s Charter to Create a Nonviolent World’ and/or using the strategic framework explained in Nonviolent Campaign Strategy for your peace, environmental or social justice campaign.

Why are the police so terrified? Essentially because they were terrorized as children and then terrorized during police training to violently defend elite interests against the rest of us. Elite control depends on us being too terrified to defend ourselves against their violence.

If humans are to survive this elite-driven onslaught, we need people courageous enough to resist police violence and other elite-driven violence strategically. Can we count on you?

This article ‘Why are Police in the USA so Terrified?’ was originally published in various progressive news outlets in November 2017.

Source of this document: https://feelingsfirstblog.wordpress.com/key-articles/why-police-in-usa-so-terrified/